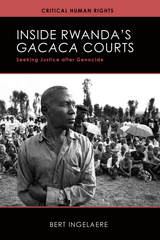 After the 1994 genocide in Rwanda, victims, perpetrators, and the country as a whole struggled to deal with the legacy of the mass violence. The government responded by creating a new version of a traditional grassroots justice system called gacaca. Bert Ingelaere offers a comprehensive assessment of what these courts set out to do, how they worked, what they achieved, what they did not achieve, and how they affected Rwandan society. Weaving together vivid firsthand recollections, interviews, and trial testimony with systematic analysis, he documents how the gacaca shifted over time from confession to accusation, from restoration to retribution. This is an authoritative account of one of the most important experiments in transitional justice after mass violence.

AUTHOR BIOGRAPHY
Bert Ingelaere is a lecturer at the Institute of Development Policy and Management, University of Antwerp, Belgium. He is the coeditor of Genocide, Risk and Resilience: An Interdisciplinary Approach.
TABLE OF CONTENTS