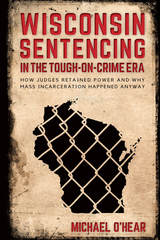 The dramatic increase in U.S. prison populations since the 1970s is often blamed on the mandatory sentencing required by "three strikes" laws and other punitive crime bills. Michael O'Hear shows that the blame is actually not so easily assigned. His meticulous analysis of incarceration in Wisconsin—a state where judges have considerable discretion in sentencing—explores the reasons why the prison population has ballooned nearly tenfold over the past forty years.

O'Hear tracks the effects of sentencing laws and politics in Wisconsin from the eve of the imprisonment boom in 1970 up to the 2010s. Drawing on archival research, original public-opinion polling, and interviews with dozens of key policymakers, he reveals important dimensions that have been missed by others. He draws out lessons from the Wisconsin experience for the United States as a whole, where mass incarceration has cost taxpayers billions of dollars and caused untold misery to millions of inmates and their families.
AUTHOR BIOGRAPHY
Michael M. O'Hear is a professor of law at Marquette University. He is the author of The Failed Promise of Sentencing Reform and Prisons and Punishment in America: Examining the Facts.
REVIEWS
"Serious students of modern sentencing reforms—as well as everyone eager to understand the roots of, and potential responses to, modern mass incarceration—must have this book on their reading list. O'Hear thoroughly canvasses the dynamic story of Wisconsin's uniquely important sentencing reform history."—Douglas Berman, author of the Sentencing Law and Policy Blog


"Fascinating political and social history. O'Hear puts national criminal justice trends into a single-state frame, providing much sharper insights than often come from trying to look at the entirety of this very big country. This is first-rate work."—Frank O. Bowman III, University of Missouri School of Law


“Highly recommended to judges, academics, students, or anyone interested in learning more about effective sentencing reform.”—New York Journal of Books

Introduction
1 Setting the Stage, Meeting the Players
2 The Seventies Synthesis
3 The Equivocal Assault on Discretion, 1980–1995
4 The Quest for Improved Community Corrections, 1980–1997
5 “Truth” and Its Consequences: The Demise of Parole
6 The 2s: Managerialism’s Modest Comeback
7 Wisconsin’s War on Drugs
8 Lessons