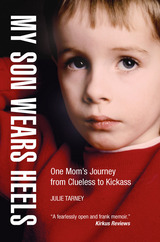 Julie had no idea what that meant. She felt disoriented. Wasn’t it her role to encourage and support her child? Surely she had to set some limits to his self-expression—or did she? Would he be bullied? Could she do the right thing? What was the right thing?

The internet was no help, because there was no internet. And there were zero books for a mom scrambling to understand a toddler who had definite ideas about his gender, regardless of how Nature had endowed him. Terms such as transgender, gender nonconforming, and gender creative were rare or nonexistent.

Lacking a positive role model of her own, and fearful of being judged as a mom who was making her son “too feminine,” Julie embarked on an unexpected parenting path. Despite some missteps, and with no map to guide her, she learned to rely on her instincts. She listened carefully, kept an open mind, and as long as Harry was happy, she let him lead the way. Julie eventually realized that Harry knew who he was all along. Her job was simply to love and support him unconditionally, allowing him to be his authentic self. This story of a mother embracing her child’s uniqueness and her own will resonate with all families.

Winner, inaugural BeOUT Award for LGBTQ Visibility, awarded by Milwaukee Pride
AUTHOR BIOGRAPHY
Julie Tarney is a diversity, equity and inclusion speaker, trainer and executive coach who helps leaders learn how to create trans-inclusive, welcoming, and supportive organizations. She serves on the board of PFLAG NYC. Tarney was named a “Favorite Queer Hero of 2016” by HuffPost and one of BlogHer's “Voices of the Year” in 2015. A longtime resident of Milwaukee, Wisconsin, she now lives in Brooklyn, New York. Visit julietarney.com
TABLE OF CONTENTS


Foreword by Diane Ehrensaft
How Do You Know I’m a Boy?
The Toilet Paper Bride
The Dress-Up Box
Out of the Closet
Not Like Other Boys
Four Bullies Suspended
From Blue Wig to Hedwig
Harry Decides
The Pain in Spain
The Graduation Stilettos
The Glass Half Full
Epilogue: The Night Jesus Wore Lace
Acknowledgments
Resources for Parents and Youth