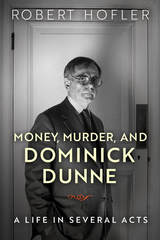 Though Dominick Dunne seemed to live his entire adult life in the public eye, Robert Hofler reveals a conflicted, enigmatic man who reinvented himself again and again. Dunne was, in turn, a television and film producer, Vanity Fair journalist, and author of best-selling novels. Money, Murder, and Dominick Dunne brings to light a number of his difficult and tragic relationships: his intense rivalry with his brother, gay lovers he hid throughout his life, and fights with his editors. Hofler discusses the painful rift in the family after the murder of Dunne's daughter, Dominique—and Dunne's coverage of her killer's trial, which launched his career as a reporter.
AUTHOR BIOGRAPHY
Robert Hofler is the lead theater critic at TheWrap and the author of The Man Who Invented Rock Hudson, Party Animals, and Sexplosion: How a Generation of Pop Rebels Broke All the Taboos. He lives in New York City.
REVIEWS
"You've met the two Mrs. Grenvilles. Now meet the two Dominick Dunnes, or three, or four. Robert Hofler stunningly captures all of them."—Stephen M. Silverman, author of David Lean


"In a compelling new biography that is as breezy as it is revelatory, Robert Hofler carefully traces the epic scope of Dominick Dunne's life, with the careful appreciation for detail, colour and gossip that Dunne demonstrated in his legendary coverage of the crimes and scandals of the rich and famous."—Financial Times


"An excellent biography of a Hollywood life with all its success and failure in detail."—New York Social Diary