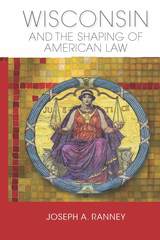 State laws affect nearly every aspect of our daily lives—our safety, personal relationships, and business dealings—but receive less scholarly attention than federal laws and courts. Joseph A. Ranney looks at how state laws have evolved and shaped American history, through the lens of the historically influential state of Wisconsin.

Organized around periods of social need and turmoil, the book considers the role of states as legal laboratories in establishing American authority west of the Appalachians, in both implementing and limiting Jacksonian reforms and in navigating legal crises before and during the Civil War—including Wisconsin's invocation of sovereignty to defy federal fugitive slave laws. Ranney also surveys judicial revolts, the reforms of the Progressive era, and legislative responses to struggles for civil rights by immigrants, women, Native Americans, and minorities in the nineteenth and twentieth centuries. Since the 1960s, battles have been fought at the state level over such issues as school vouchers, voting, and abortion rights.

AUTHOR BIOGRAPHY
Joseph A. Ranney is the Adrian P. Schoone Fellow in Wisconsin Law and Legal Institutions at Marquette University Law School and a partner with the firm DeWitt Ross & Stevens in Madison, Wisconsin. He is the author of several books, including Trusting Nothing to Providence: A History of Wisconsin's Legal System, honored by the American Library Association as a notable book on state and local government.
REVIEWS
"Not simply about Wisconsin's legal history, for Ranney covers the sweep of state laws in American history from the Northwest Ordinance of 1787 to recent legal questions of the twenty-first century. Impressively researched and invitingly written, this is a unique introduction to our states as laboratories of democracy." —Lloyd C. Gardner, Rutgers University