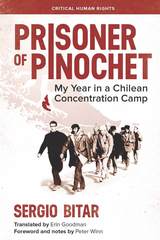 Prisoner of Pinochet: My Year in a Chilean Concentration Camp
by Sergio Bitar
translated by Erin Goodman
foreword by Peter Winn

September 11, 1973: Chilean military forces under General Augusto Pinochet overthrew the elected government of President Salvador Allende, bombing the presidential palace with the president inside. Minister of Mining Sergio Bitar was forcibly detained along with other members of the Allende cabinet and confined on bleak, frigid Dawson Island in the Magellan Straits.

Prisoner of Pinochet is the gripping first-person chronicle of Bitar's year as a political prisoner before being expelled from Chile; a poignant narrative of men held captive together in a labor camp under harsh conditions, only able to guess at their eventual fate; and an insightful memoir of the momentous events of the early 1970s that led to seventeen years of bloody authoritarian rule in Chile. Available in English for the first time, this edition includes maps and photos from the 1970s and contextual notes by historian Peter Winn.
AUTHOR BIOGRAPHY
Sergio Bitar returned to Chile after years of exile and served as a senator and cabinet minister. He is the president of the Chilean Council for Strategy and Foresight, and his many books include Democratic Transitions: Conversations with World Leaders. Erin Goodman is the associate director of academic programs at the David Rockefeller Center for Latin American Studies, Harvard University, and coeditor of Reflections on Memory and Democracy. Peter Winn is a professor of Latin American history at Tufts University and coeditor of The Chile Reader.
REVIEWS
"Democracy is fragile, and only fully appreciated when it is lost. Sergio Bitar, now one of the most prominent political leaders in Chile, recounts the story of the 1973 military coup and his imprisonment in a direct, unsentimental style that sharply highlights the dramatic events he narrates."
—Isabel Allende Llona


"A compelling account, a best seller in Chile ... and an important contribution to the country's understanding of itself." —Foreign Affairs