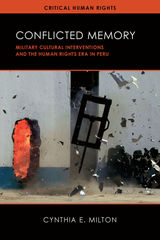 Conflicted Memory: Military Cultural Interventions and the Human Rights Era in Peru
by Cynthia E. Milton
University of Wisconsin Press, 2020
Paper: 978-0-299-31504-7
Cynthia E. Milton reveals how Peru's military has engaged in a tactical cultural campaign—via books, films, museums—to shift public opinion, debate, and memories about the role it played in the nation's recent violent past. Milton calls attention to fabrications and goes further to deeply explore the ways members of the Peruvian military see their past, how they actively commemorate and curate it in the present, and why they do so. Her nuanced approach upends frameworks of memory studies that reduce military and ex-military to a predictable role of outright denial.
AUTHOR BIOGRAPHY
Cynthia E. Milton is the Canada Research Chair in Latin American History at the Université de Montréal. She is the editor of Art from a Fractured Past: Memory and Truth-Telling in Post–Shining Path Peru.
REVIEWS
"Brings to light how military 'entrepreneurs of memory' strategically place memory products in a memory marketplace. A major intervention in debates about Peru's internal armed conflict of the 1980s and '90s and its aftermath, which will interest scholars in many disciplines and regions."—Paulo Drinot, coeditor of Comics and Memory in Latin America


"This incisive analysis of Peruvian countermemories explores the military's seemingly failed cultural memory production, its lack of artistry and inability to suppress evidence. Though the military is unable to fully reclaim heroic and self-sacrificing patriotism, Milton nonetheless recognizes its success in shaping memory politics and current political debates."—Leigh Payne, author of Unsettling Accounts