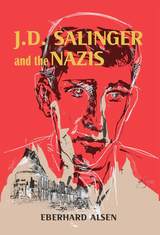 Before J.D. Salinger became famous for his 1951 novel The Catcher in the Rye and infamous as a literary recluse, he was a soldier in World War II. While serving in the U.S. Army's Counter Intelligence Corps (CIC) in Europe, Salinger wrote more than twenty short stories and returned home with a German war bride. Eberhard Alsen, through meticulous archival research and careful analysis of the literary record, corrects mistaken assumptions about the young writer's war years and their repercussions. Though recent biographies and films claim that Salinger regularly participated in combat, Alsen cites military documents showing that his counterintelligence work was well behind the front lines.

Alsen, a longtime Salinger scholar who witnessed the Nazi regime firsthand as a child in Germany, tracks Salinger's prewar experiences in the army, his work for the CIC during significant military campaigns, and his reactions to three military disasters that killed more than a thousand fellow soldiers in his Fourth Infantry Division. Alsen also identifies the Nazi death camp where Salinger saw mounds of recently burned bodies. Revealing details shed light on Salinger's outspoken disgust for American military leaders, the personality changes that others saw in him after the war, and his avoidance of topics related to the Holocaust.
AUTHOR BIOGRAPHY
Eberhard Alsen is a professor emeritus of English at Cortland College, State University of New York. He is the author of several books, including A Reader's Guide to J.D. Salinger and Salinger's Glass Stories as a Composite Novel.
TABLE OF CONTENTS

Introduction
1 A Secular Jewish Upbringing
2 Salinger in Austria before the Nazi Takeover
3 Continued Unconcern about the Nazis
4 Ready to Kill Nazis
5 The Slapton Sands Disasters
6 Under Fire from the Wehrmacht
7 Salinger’s Job as a CIC Agent
8 The Saint-Lô SNAFU and the Liberation of Paris
9 The Hürtgen Forest Fiasco
10 Searching for Nazi Spies and Collaborators in Luxembourg
11 Visit to a Concentration Camp
12 Nervous Breakdown
13 Was Salinger’s German Wife a Nazi?
14 Half-Heartedly Hunting Nazis after the War
15 American Bastards and Nazi Bastards
Conclusion