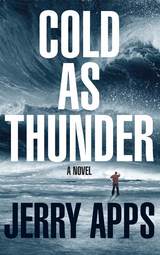 Since the Eagle Party took power in the United States, all schools and public utilities have been privatized, churches and libraries closed, and independent news media shut down. Drones buzz overhead in constant surveillance of the populace, and the open internet has been replaced by the network of the New Society Corporation. Environmental degradation and unchecked climate change have brought raging wildfires to the Western states and disastrous flooding to Eastern coastal regions.

In the Midwest, a massive storm sends Lake Michigan surging over the Door County peninsula, and thousands of refugees flee inland. In the midst of this apocalypse, a resourceful band of Wisconsin sixty-somethings calling themselves the Oldsters lays secret plans to fight the ruling regime's propaganda and show people how to think for themselves.
AUTHOR BIOGRAPHY
Jerry Apps is the author of more than thirty-five books on rural history and country life, including his series of Ames County novels. He is profiled in two documentaries aired nationally on public television, Jerry Apps: A Farm Story and A Farm Winter with Jerry Apps. His many awards and honors include the Major Achievement Award of the Council for Wisconsin Writers and the Notable Author Award of the Wisconsin Library Association. He is professor emeritus in the School of Education at the University of Wisconsin–Madison.
TABLE OF CONTENTS