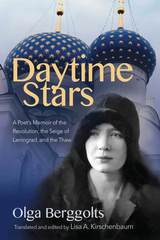 For 872 days during World War II, the city of Leningrad endured a crushing blockade at the hands of German forces. Close to one million civilians died, most from starvation. Amid the devastation, Olga Berggolts broadcast her poems on the one remaining radio station, urging listeners not to lose hope. When the siege had begun, the country had already endured decades of revolution, civil war, economic collapse, and Stalin's purges. Berggolts herself survived the deaths of two husbands and both of her children, her own arrest, and a stillborn birth after being beaten under interrogation.

Berggolts wrote her memoir Daytime Stars in the spirit of the thaw after Stalin's death. In it, she celebrated the ideals of the revolution and the heroism of the Soviet people while also criticizing censorship of writers and recording her doubts and despair. This English translation by Lisa A. Kirschenbaum makes available a unique autobiographical work by an important author of the Soviet era. In her foreword, Katharine Hodgson comments on experiences of the Terror about which Berggolts was unable or unwilling to write.
AUTHOR BIOGRAPHY
Olga Berggolts (1910–75) was a Soviet poet, writer, playwright, and journalist. Lisa A. Kirschenbaum is a professor of history at West Chester University and the author of International Communism and the Spanish Civil War, Small Comrades, and The Legacy of the Siege of Leningrad, 1941–1995.
TABLE OF CONTENTS

Part I
Chapter 1. Journey to the Town of My Childhood
The Dream
Papa’s Back
Fairy Tale of Light
Petrograd
In My Memory
The Knight of Light
The Essential Book
“It’s Mine!”
Two Meetings
Pen and Ink
“Silver Night”
Last Summer
Chapter 2. That Forest Clearing
Chapter 3. The Nevsky Gate Campaign
Daytime Stars
Day of Heights: Childhood
Day of Heights: Flanders Chain
Flowers Immortal
Day of Heights: “Guzhovo Will Not Be Taken”
Lenin
“You’re Published at Our Factory”
Day of Heights: Lermontov
Day of Heights: “Defend the Revolution!”
The Valdai Duga
The Crop-Eared Bell
The Path to My Father’s House
“Anton Ivanovich Is Angry”
Cigarette Break
Little Steps in the Ice
The Secret of the Earth
Princess Barbara
Glory of the World
Return Path