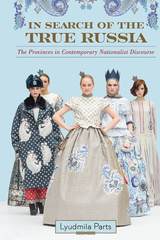 Russia's provinces have long held a prominent place in the nation's cultural imagination. Popular culture has increasingly turned from the newly prosperous, multiethnic, and westernized Moscow to celebrate the hinterlands as repositories of national traditions and moral strength. Lyudmila Parts argues that this change has directed debate about Russia's identity away from its loss of imperial might and global prestige and toward a hermetic national identity based on the opposition of "us vs. us" rather than "us vs. them." In Search of the True Russia offers an intriguing analysis of the contemporary debate over what it means to be Russian.
AUTHOR BIOGRAPHY
Lyudmila Parts is a professor of Russian and Slavic studies at McGill University in Montreal. She is the author of The Chekhovian Intertext: Dialogue with a Classic and the editor of The Russian Twentieth-Century Short Story: A Critical Companion.
REVIEWS
"A fascinating study of how the internal Other of the provinces has been replacing the external Other of the West in post-Soviet cultural discourse. Useful for anyone interested in contemporary Russian culture."
—Anne Lounsbery, New York University


“A valuable exploration of how the symbolic geography of the provinces as an authentic Russian space is connected to the discourse of Russian nationalism.”—Russian Review


“A thought-provoking, topical book about an important theme. . . . In her comprehensive book, Lyudmila Parts analyses this phenomenon, the significance of the provinces in the new Russia, from the viewpoint of literature, journalism and cinema.”—Scando-Slavica


List of Illustrations
Acknowledgments
Note on Translation and Transliteration

Introduction: Imagining the Provinces
1 Journalism: “We Look for Wealth in the Provinces and Find It There!”
2 Literature: In the Provincial State of Mind
3 Film and TV: “My Country—My Moscow!”
Conclusion: On Cultural Authenticity