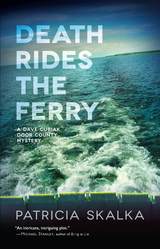 It’s a sparkling August day on Washington Island and the resonant notes of early classical music float on the breeze toward the sailboats and ferries that ply the waters of Death’s Door strait. After a forty-year absence, the Viola da Gamba Music Festival has returned to the picturesque isle on the tip of Wisconsin’s Door County peninsula. Sheriff Dave Cubiak enjoys a rare day off as tourists and a documentary film crew hover around the musicians.

Cubiak follows a trail of murder, kidnapping, and false identity that leads back to the calamitous night of the twin tragedies. With the lives of those he holds most dear in peril, the sheriff pursues a ruthless killer into the stormy northern reaches of Lake Michigan.
AUTHOR BIOGRAPHY
Patricia Skalka is the author of Death Stalks Door County, Death at Gills Rock, and Death in Cold Water, winner of the Edna Ferber Fiction Award from the Council for Wisconsin Writers. She is president of the Chicagoland chapter of Sisters in Crime and divides her time between Chicago and Door County, Wisconsin. A former staff writer at Reader’s Digest, she presents writing workshops throughout the United States. Her nonfiction books have been published by Random House, St. Martin’s, and Rodale.
REVIEWS
"An intricate, intriguing plot in which Door County Sheriff Dave Cubiak can stop a ruthless killer only by finding the link between a spate of murders and a forty-year-old mystery." —Michael Stanley, author of the Detective Kubu series