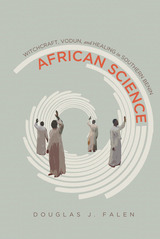 In this sensitive and personal investigation into Benin's occult world, Douglas J. Falen wrestles with the challenges of encountering a reality in which magic, science, and the Vodun religion converge into a single universal force. He takes seriously his Beninese interlocutors' insistence that the indigenous phenomenon known as àze ("witchcraft") is an African science, credited with fantastic and productive deeds, such as teleportation and supernatural healing.

Although the Beninese understanding of àze reflects positive scientific properties in its use of specialized knowledge to harness nature's energy and realize economic success, its boundless power is inherently ambivalent because it can corrupt its users, who dispense death and destruction. Witches and healers are equivalent to supervillains and superheroes, locked in epic battles over malevolent and benevolent human desires. Beninese people's discourse about such mystical confrontations expresses a philosophy of moral duality and cosmic balance. Falen demonstrates how a deep engagement with another lived reality opens our minds and contributes to understanding across cultural difference.
AUTHOR BIOGRAPHY
Douglas J. Falen is a professor of anthropology at Agnes Scott College in Decatur, Georgia. He is the author of Power and Paradox: Authority, Insecurity, and Creativity in Fon Gender Relations.
TABLE OF CONTENTS


List of Illustrations
Acknowledgments
Note on Fon Transcription and Pronunciation

Introduction
1 Àzě and Bǒ: Witchcraft and Sorcery in Benin
2 Black and White: Witchcraft, Science, and Identity
3 Whose Reality?
4 Religion and the Occult: Opposition and Connection
5 Healing and the Globalization of Witchcraft
Conclusion