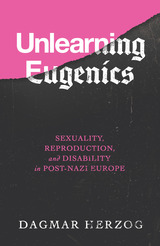 Since the defeat of the Nazi Third Reich and the end of its horrific eugenics policies, battles over the politics of life, sex, and death have continued and evolved. Dagmar Herzog documents how reproductive rights and disability rights, both latecomers to the postwar human rights canon, came to be seen as competing—with unexpected consequences.

Bringing together the latest findings in Holocaust studies, the history of religion, and the history of sexuality in postwar—and now also postcommunist—Europe, Unlearning Eugenics shows how central the controversies over sexuality, reproduction, and disability have been to broader processes of secularization and religious renewal. Herzog also restores to the historical record a revelatory array of activists: from Catholic and Protestant theologians who defended abortion rights in the 1960s–70s to historians in the 1980s–90s who uncovered the long-suppressed connections between the mass murder of the disabled and the Holocaust of European Jewry; from feminists involved in the militant "cripple movement" of the 1980s to lawyers working for right-wing NGOs in the 2000s; and from a handful of pioneers in the 1940s–60s committed to living in intentional community with individuals with cognitive disability to present-day disability self-advocates.
AUTHOR BIOGRAPHY
Dagmar Herzog is a Distinguished Professor of History and Daniel Rose Faculty Scholar at the Graduate Center, City University of New York. Her many books include Cold War Freud: Psychoanalysis in an Age of Catastrophes and Sexuality in Europe: A Twentieth-Century History.
REVIEWS
"An inspiring book about the entanglement of sexuality, reproduction, and disability in Europe after the Second World War. . . . Well written and offers many meaningful insights in the debates about sexuality and disability in Europe. Reading it is time well spent."—H-Disability