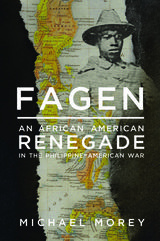 In 1898, in an era of racial terror at home and imperial conquest abroad, the United States sent its troops to suppress the Filipino struggle for independence, including three regiments of the famed African American "Buffalo Soldiers." Among them was David Fagen, a twenty-year-old private in the Twenty-Fourth Infantry, who deserted to join the Filipino guerrillas. He led daring assaults and ambushes against his former comrades and commanders—who relentlessly pursued him without success—and his name became famous in the Philippines and in the African American community.

The outlines of Fagen's legend have been known for more than a century, but the details of his military achievements, his personal history, and his ultimate fate have remained a mystery—until now. Michael Morey tracks Fagen's life from his youth in Tampa as a laborer in a phosphate camp through his troubled sixteen months in the army, and, most importantly, over his long-obscured career as a guerrilla officer. Morey places this history in its larger military, political, and social context to tell the story of the young renegade whose courage and defiance challenged the supremacist assumptions of the time.
AUTHOR BIOGRAPHY
Michael Morey is a writer and independent historian. He lives in Sonoma County, California.
TABLE OF CONTENTS