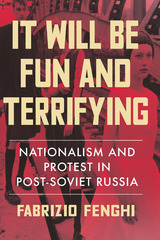 The National Bolshevik Party, founded in the mid-1990s by Eduard Limonov and Aleksandr Dugin, began as an attempt to combine radically different ideologies. In the years that followed, Limonov, Dugin, and the movements they led underwent dramatic shifts. The two leaders eventually became political adversaries, with Dugin and his organizations strongly supporting Putin’s regime while Limonov and his groups became part of the liberal opposition.
To illuminate the role of these right-wing ideas in contemporary Russian society, Fabrizio Fenghi examines the public pronouncements and aesthetics of this influential movement. He analyzes a diverse range of media, including novels, art exhibitions, performances, seminars, punk rock concerts, and even protest actions. His interviews with key figures reveal an attempt to create an alternative intellectual class, or a “counter-intelligensia.” This volume shows how certain forms of art can transform into political action through the creation of new languages, institutions, and modes of collective participation.
AUTHOR BIOGRAPHY
Fabrizio Fenghi is an assistant professor of Slavic studies at Brown University.
REVIEWS
“A compelling and insightful work of scholarship. I’m particularly impressed with the fact that Fenghi manages to include sketches of individual National Bolsheviks as a seamless part of a narrative that is largely about public figures.”—Eliot Borenstein, New York University


“Provides a rich and nuanced narrative filling in an important piece of the puzzle of post-Soviet Russian culture and politics. This book offers fascinating insights into the curious blend of conservative postmodernism and radical provocations that fuels the Russian far right.”—Peter Rutland, Wesleyan University


Contents
List of Illustrations ix
Acknowledgments xiii
Note on Transliteration xvii
Introduction 3
1 “The Power of the State Should Be in the Hands of the Punks”: The Literary Origins of a Protest Movement 23
2 Making Post-Soviet Counterpublics: The Aesthetics of Limonka and the National Bolshevik Party 56
3 Bohemianism, Political Militancy, and Resistance to Modernity: The NBP as Social Practice 96
4 Aleksandr Dugin’s Conservative Postmodernism 129
5 A Conservative Bohemia: The Eurasia Movement as an Aesthetic-Political Project 159
Conclusion 219
Notes 227
Works Cited 259
Index 283