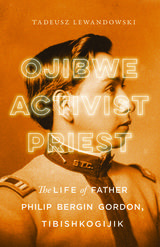 Born in Wisconsin, Philip Bergin Gordon—whose Ojibwe name Tibishkogijik is said to mean Looking into the Sky—became one of the first Native Americans to be ordained as a Catholic priest in the United States. Gordon's devotion to Catholicism was matched only by his dedication to the protection of his people. A notable Native rights activist, his bold efforts to expose poverty and corruption on reservations and his reputation for agitation earned him the nickname "Wisconsin's Fighting Priest."
Drawing on previously unexplored materials, Tadeusz Lewandowski paints a portrait of a contentious life. Ojibwe, Activist, Priest examines Gordon's efforts to abolish the Bureau of Indian Affairs, his membership in the Society of American Indians, and his dismissal from his Ojibwe parish and exile to a tiny community where he'd be less likely to stir up controversy. Lewandowski illuminates a significant chapter in the struggle for Native American rights through the views and experiences of a key Native progressive.
AUTHOR BIOGRAPHY
Tadeusz Lewandowski is an associate professor and head of the department of American literature and culture at the University of Opole in Poland. He is the author of Dwight Macdonald on Culture: The Happy Warrior of the Mind, Reconsidered and Red Bird, Red Power: The Life and Legacy of Zitkala-Ša.
TABLE OF CONTENTS

1 The Ojibwe and the Gordon Family 10

2 From Boyhood to the Priesthood 21

3 The Society and the Missionary 34

4 A Conference and a Scandal at Haskell 45

5 Carlos Montezuma, War-Whoop, and the Bureau 57

7 A New Appointment at Reserve 90

10 Continuing the Fight from Centuria 117