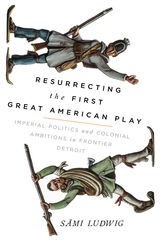 In the mid-eighteenth century, the Ottawa chief Pontiac (also spelled Ponteach) led an intertribal confederacy that resisted British power in the Great Lakes region. This event was immortalized in the play Ponteach, or the Savages of America: A Tragedy, attributed to the infamous frontier soldier Robert Rogers. Never performed, it is one of the earliest theatrical renderings of the region, depicting its hero in a way that called into question eighteenth-century constructions of Indigenous Americans.
Sämi Ludwig contends that Ponteach's literary and artistic merits are worthy of further exploration. He investigates questions of authorship and analyzes the play's content, embracing its many contradictions as enriching windows into the era. In this way, he suggests using Ponteach as a tool to better understand British imperialism in North America and the emerging theatrical forms of the Young Republic.
AUTHOR BIOGRAPHY
Sämi Ludwig is a professor of American studies at the Université de Haute Alsace, Mulhouse. He is the author of Concrete Language: Intercultural Communication in Maxine Hong Kingston's "The Woman Warrior" and Ishmael Reed's "Mumbo Jumbo" and Pragmatist Realism: The Cognitive Paradigm in American Realist Texts.
TABLE OF CONTENTS


Contents
List of Illustrations ix
Acknowledgments xi
Introduction: From Scalping Knife to Iambic Pentameter 3
Part I. Outside Ponteach: The Players and the Historical Context
1 Who Was Pontiac? 15
2 The Adventurous Life of Major Robert Rogers 31
3 The Historical Background of Ponteach 65
Part II. Inside Ponteach: The Play Text and Its Literary Qualities
4 An Artistic Failure? 97
5 The Realistic Dimension 105
6 The Power of European Conventions 127
7 The Aesthetic Dimension 140
8 Important Issues 158
9 Open Questions 171
Conclusions. The Original Backwoodsman?
10 Centrifugal Insights 187
Notes 215
Bibliography 245
Index 259