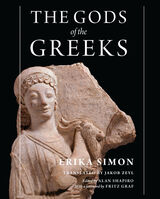 Originally published in Germany fifty years ago, The Gods of the Greeks has remained an enduring work. Influential scholar Erika Simon was one of the first to emphasize the importance of analyzing visual culture alongside literature to better understand how ancient Greeks perceived their gods. Giving due consideration to cult ritual and the phenomenon of genealogical relationships between mortals and immortals, this pioneering volume remains one of the few to approach the Greek gods from an archaeological perspective. From Zeus to Hermes, each of the major deities is considered in turn, with Simon’s insights on their nature and attributes guiding the reader to a fuller understanding of how their followers perceived and worshipped them in the ancient world.

This careful and fluid translation finally makes Simon’s landmark edition accessible to English-language readers. With an abundance of beautiful illustrations, the book examines portrayals of the thirteen major gods in art over the course of two millennia. Scholars who study the lives and practices of those living in ancient Greece will value this newest contribution.
AUTHOR BIOGRAPHY
Erika Simon (1927–2019) was professor emeritus of classical archaeology at the University of Würzburg. She published hundreds of articles and reviews and almost two dozen books, including Festivals of Attica: An Archaeological Commentary. Jakob Zeyl is a former professor of classics and assistant dean of arts and sciences at Wilfrid Laurier University in Waterloo, Ontario. Alan Shapiro is the Academy Professor and W.H. Collins Vickers Professor of Archaeology Emeritus at Johns Hopkins University and the author of The Cambridge Companion to Archaic Greece and Worshipping Women: Ritual and Reality in Classical Athens.
REVIEWS
“Shows an impressive mastery of the archaeological and poetic documents from Homer and Hesiod to Pindar and Attic tragedy.”—Classical Journal


“Decades after its initial publication in German, Erika Simon’s magisterial study of the Olympian gods is still a basic source for Greek religion in all its manifestations. Now thanks to this elegant translation, English readers will have the opportunity to delve deeply into the archaeological and textual sources which inform our understanding of these ageless divinities.”—Jenifer Neils, American School of Classical Studies at Athens


"The Gods of the Greeks arguably remains the most detailed study of ancient art associated with the main deities of the Greek pantheon. The English translation will undoubtedly fulfil the author’s and editor’s aim of increasing accessibility of this work to students and the general public; the work is well presented with glossy images and is easily navigated by means of the helpful indexes."—The Classical Review