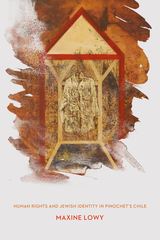 In the first half of the twentieth century, Jewish immigrants and refugees sought to rebuild their lives in Chile. Despite their personal histories of marginalization in Europe, many of these people or their descendants did not take a stand against the 1973 military coup, nor the political persecution that followed. Chilean Jews' collective failure to repudiate systematic human rights violations and their tacit support for the military dictatorship reflected a complicated moral calculus that weighed expediency over ethical considerations and ignored individual acts of moral courage.

Maxine Lowy draws upon hundreds of first-person testimonials and archival resources to explore Chilean Jewish identity in the wake of Pinochet's coup, exposing the complex and sometimes contradictory development of collective traumatic memory and political sensibilities in an oppressive new context. Latent Memory points to processes of community gestures of moral reparation and signals the pathways to justice and healing associated with Shoah and the Jewish experience. Lowy asks how individuals and institutions may overcome fear, indifference, and convenience to take a stand even under intense political duress, posing questions applicable to any nation emerging from state repression.
AUTHOR BIOGRAPHY
Maxine Lowy is an editor, translator, and freelance journalist based in Santiago, Chile. Her work focuses on human rights and contemporary social issues. She is the author of Sembradoras de fe y esperanza: El legado de mujeres de comunidades cristianas populares. She created and coordinated the human rights website www.memoriayjusticia.cl.
REVIEWS
“One of the most important books written today on the role of historical memory and the Jewish community during Pinochet’s regime. Lowy's thought-provoking observations and courage help us understand the legacy of Chilean Jews and the nation's silence, filled with secrets and complicity.”—Marjorie Agosin, Wellesley College


“Lowy’s book provides a needed perspective on the events of the Chilean dictatorship: how Jews remember their own experience on the state violence, in dialogue with their own memory of the Holocaust and Jewish history. Her contribution provides a base for future scholarly research.”—Valeria Navarro Rosenblatt

Part 1. A History Shared, and a Divergence
1 Exodus
2 Strangers in a Strange Land
3 Community Dilemmas

Part 2. Chronicles of prisoners and protectors
4 These We Shall Remember
5 Rescuers and Bystanders