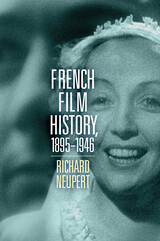 French Film History, 1895–1946 addresses the creative and often unexpected trajectory of French cinema, which continues to be one of the most provocative and engaging cinemas in the world. Tracing French film and its developments from the earliest days, when France dominated world cinema, up through the Occupation and Liberation, Neupert outlines major players and films that made it so influential. Paris held a privileged position as one of the world’s hubs of scientific, social, and cultural experimentation; it is no wonder that the cinema as we know it was born there in the nineteenth century. This book presents French cinema’s most significant creative filmmakers and movies but also details the intricate relations between technology, economics, and government that helped shape the unique conditions for cinematic experimentation in the country.

Neupert explains the contexts behind the rise of cinema in France, including groundbreaking work by the Lumière family, Georges Méliès, and Alice Guy; the powerhouse studios of Pathé and Gaumont; directors such as René Clair, Germaine Dulac, Marcel Pagnol, and Jean Renoir; and an array of stars, including Max Linder, Jean Gabin, Josephine Baker, and Michèle Morgan. The first fifty years of French film practice established cinema’s cultural and artistic potential, setting the stage for the global post–World War II explosion in commercial movies and art cinema alike. French film and its rich history remain at the heart of cinematic storytelling and our moviegoing pleasure.
AUTHOR BIOGRAPHY
Richard Neupert is the Charles H. Wheatley Professor of the Arts in the Department of Theatre and Film Studies at the University of Georgia. He is the author of A History of the French New Wave Cinema, French Animation History, and, most recently, John Lasseter.
REVIEWS
“A deeply researched and compelling history of the first five decades of French cinema. Neupert freshens our understanding of iconic films and directors, while also unearthing new discoveries. French Film History reveals French cinema’s national specificity as well as its global circulation and influence.”—Kelley Conway, University of Wisconsin–Madison


“French Film History 1895-1946 is a comprehensive summary of the first 50 years following the birth of cinema in France and includes a fascinating chapter on filmmaking under Vichy and the Nazi occupation (1940-45). French directors produced almost no overtly pro-German movies, seldom criticized the U.S. or Great Britain, slipped in some anti-Nazi references and generally maintained an ambience of ambiguity in the face of grave danger.”—Shepherd Express