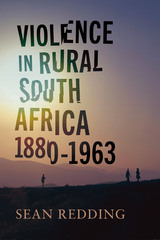 Violence was endemic to rural South African society from the late nineteenth century to the mid-twentieth century. But acts of violence were not inherent in African culture; rather, violence resulted from the ways in which Africans navigated the hazardous social and political landscape imposed by white rule. Focusing on the Eastern Cape province, Sean Redding investigates the rise of large-scale lethal fights among men, increasingly coercive abduction marriages, violent acts resulting from domestic troubles and witchcraft accusations within families and communities, and political violence against state policies and officials.

Many violent acts attempted to reestablish and reinforce a moral, social, and political order among Africans. However, what constituted a moral order changed as white governance became more intrusive, land became scarcer, and people reconstructed their notions of “traditional” culture. State policies became obstacles around which Africans had to navigate by invoking the idea of tradition, using the state’s court system, alleging the use of witchcraft, or engaging in violent threats and acts. Redding’s use of multiple court cases and documents to discuss several types of violence provides a richer context for the scholarly conversation about the legitimation of violence in traditions, family life, and political protest.
AUTHOR BIOGRAPHY
Sean Redding, Zephaniah Swift Moore Professor of History at Amherst College, is the author of Sorcery and Sovereignty: Taxation, Power, and Rebellion in Rural South Africa.
REVIEWS
“An important contribution. Redding draws brilliantly on a range of archival sources to ask pointed questions about the history of violence in rural South Africa. Far from being an expression of atavistic African proclivities, the violence that marked white rule was, in fact, a response to the disruptions caused by that rule. Violent actions by African actors constituted a form of social navigation in a world over which they had limited control. Redding shows how it is possible to study violence historically without falling into tired tropes about ‘black-on-black violence.’"—Jacob Dlamini, Princeton University

Introduction: A History of Violence, a Question of Tradition
1 Neighbors and Rivals: Faction Fighting and Traditional Violence in the Rural Transkei
2 “The Girl Is Not Consulted”: Abduction Marriage and Gendered Traditions of Violence
3 Deaths in the Family: Supernatural Harms and Violent Remedies
4 Sons and “Hooligans,” “World-Destroyers” and Rebels: Traditional Violence Takes a
Nationalist Turn
Conclusion: Rural Violence Reconsidered