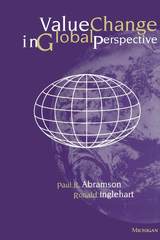 In this pioneering work, Paul R. Abramson and Ronald Inglehart show that the gradual shift
from Materialist values (such as the desire for economic and physical security) to Post-materialist values (such as the desire for freedom, self-expression, and the quality of life) is in all likelihood a global phenomenon. Value Change in Global Perspective analyzes over thirty years worth of national surveys in European countries and presents the most comprehensive and nuanced discussion of this shift to date. By paying special attention to the way generational replacement transforms values among mass publics, the authors are able to present a comprehensive analysis of the processes through which values change.
In addition, Value Change in Global Perspective analyzes the 1990-91 World Values Survey, conducted in forty societies representing over seventy percent of the world's population. These surveys cover an unprecedentedly broad range of the economic and political spectrum, with data from low-income countries (such as China, India, Mexico, and Nigeria), newly industrialized countries (such as South Korea) and former state-socialist countries in Eastern Europe and the former Soviet Union. This data adds significant new meaning to our understanding of attitude shifts throughout the world.
Value Change in Global Perspective has been written to meet the needs of scholars and students alike. The use of percentage, percentage differences, and algebraic standardization procedures will make the results easy to understand and useful in courses in comparative politics and in public opinion.
Paul R. Abramson is Professor of Political Science, Michigan State University. Ronald Inglehart is Professor of Political Science and Program Director, Institute for Social Research, University of Michigan.
TABLE OF CONTENTS