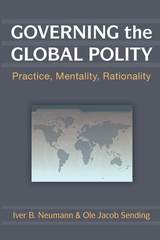 "There have been many attempts to adapt Foucault's arguments to the study of international relations, but this powerful and provocative book is the most sustained, and arguably the most successful in showing how the governmentality approach can be adapted to the analysis of global politics."
---Barry Hindess, Research School of Social Sciences, The Australian National University

A highly welcome and original contribution to contemporary debates on the shape and future of the international system and on the possibility of reconfiguring IR theory as social theory."
---Mathias Albert, Bielefeld University, Germany

"Iver Neumann and Ole Jacob Sending have put meat on the bones of Michel Foucault's notion of governmentality, fulfilling the hopes of long-famished students and scholars of global governance. Through their focus on specific case studies, the authors have provided a much-needed contribution to the international relations literature, one that is sure to become a staple of courses and seminars throughout the world."
---Ronnie D. Lipschutz, University of California, Santa Cruz

Drawing on the state formation literature and on social theory, particularly the works of Weber and Foucault, Iver B. Neumann and Ole Jacob Sending question the terms of the realist-constructionist debate. Through detailed case studies, they demonstrate that states use nongovernmental organizations and international organizations indirectly to enforce social order and, ultimately, to increase their own power. At the same time, global politics is dominated by a liberal political rationality that states ignore at their peril. While states remain as strong as ever, they operate within a global polity of new hierarchies among states and between states and other actors.

Iver B. Neumann is Director of Research at the Norwegian Institute of International Affairs and Professor of Russian Studies at the University of Oslo.

Ole Jacob Sending is Senior Researcher at the Norwegian Institute of International Affairs, where he heads the Research Programme on Global Governance and International Organizations.

Also available as an e-book.