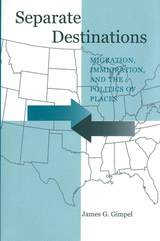 Natives who change residence do not settle in the same places as immigrants. Separate Destinations argues that these distinct mobility patterns, coupled with record levels of immigration from impoverished third world nations, are balkanizing the American electorate. James G. Gimpel examines the consequences of different patterns of movement and settlement on the politics of the communities in which these different groups settle.
Newer immigrants are con-strained by a lack of education, money, English literacy, and information--and frequently by discrimination--to live in areas of coethnic settlement. Domestic, native-born migrants--predominantly Caucasian--free of discrimination and possessing more money and information, move where they wish, often to communities where immigrants are not welcome or cannot afford to live. Strong evidence suggests that spatially isolated immigrants are slower to naturalize and get involved in politics than domestic migrants.
Gimpel looks closely at states with very different patterns of migration and immigration: California, Colorado, Kansas, Kentucky, Florida, Pennsylvania, and New York. In these states, Gimpel shows the impact of population mobility on party registration, party votes, and voter turnout and asks whether population changes have changed the dominant party in a state or produced a political reaction from natives.
Separate Destinations contains a number of thematic maps detailing the settlement patterns of internal migrants and immigrants for both counties and census tracts. Blending insights from a number of social science disciplines, including economics, demography, sociology, political science, and anthropology, this book will be of interest to a wide and diverse readership of scholars, students, and policymakers.
James G. Gimpel is Associate Professor of Government, University of Maryland.
TABLE OF CONTENTS