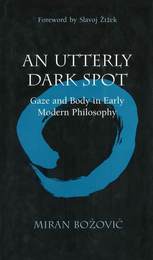 "A fascinating and often sideways look at bodies as they appear to early modern philosophy. Miran Bozovic has a refreshing ability to stand things on their heads and to produce an illuminating display of the symmetries and asymmetries in different conceptual views regarding bodies as gazed upon."
---Roger Woolhouse, University of York
— Roger Woolhouse, University of York

TABLE OF CONTENTS
Contents
Introduction
1. The God of the Transvestites
2. A Brief History of Insects
3. Before the First Sight
4. The Rebellion of the Body
5. Occasionalism and Madness
6. An Utterly Dark Spot
Notes
Bibliography
REQUEST ACCESSIBLE FILE