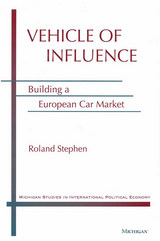 This study examines a crucial period in European integration, ending in the early 1990s, when significant progress was made towards the dream of a unified European market. It shows how European automakers were part of these changes and how their influence within the institutions of the European Union (EU) yielded a wide range of policy compromises governing a single European car market.
The book begins by reviewing the history of the EU and the logic of regional free trade, and goes on to develop a political explanation for the kinds of changes that actually occurred. The author argues that European automakers enjoyed a privileged place in the political arena, albeit one much transformed by the new institutions of the EU. Therefore, these firms often significantly influenced regional policy outcomes. The argument is applied to policymaking in the important areas of environmental regulation, trade, subsidies, and anti-trust regulation.
This work lies at the intersection of business, economics, and political science and is of interest to both experts and non-specialists with an interest in the tremendous economic and political changes brought about by the creation of a united Europe and, more generally, by the worldwide process of regional economic integration. Academics, professionals, businessmen, and leaders in government all have something to learn from the way in which firms and governments combined to build the largest car market in the world.
Roland Stephen is Assistant Professor in the Department of Political Science, North Carolina State University.
TABLE OF CONTENTS
Contents
List of Figures
List of Tables
Preface
1. Completing Europe’s Internal Market: The Single European Act in Perspective
2. Understanding the Role of Governments, Firms, and Institutions
3. The Political Economy of the European Automobile Industry
4. The Politics of Automobile Emissions Control
5. The Politics of External Trade
6. Competition Policy in the European Union
7. Economics, Politics, and Institutions
Appendix
Notes
Bibliography
Index
REQUEST ACCESSIBLE FILE