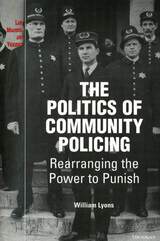 In this in-depth examination of community policing in Seattle, William T. Lyons, Jr. explores the complex issues associated with the establishment and operation of community policing, an increasingly popular method for organizing law enforcement in this country.
Stories about community policing appeal to a nostalgic vision of traditional community life. Community policing carries with it the image of a safe community in which individual citizens and businesses are protected by police they know and who know them and their needs. However, it also carries an image of community based in partnerships that exclude the least advantaged, strengthen the police, and are limited to targeting those disorders feared by more powerful parts of the community and most amenable to intervention by professional law enforcement agencies.
The author argues that the politics of community policing are found in the construction of competing and deeply contested stories about community and the police in environments characterized by power inbalances. Community policing, according to the author, colonizes community life, increasing the capacity of the police department to shield itself from criticism, while manifesting the potential for more democratic forms of social control as evidenced by police attention to individual rights and to impartial law enforcement.
This book will be of interest to sociologists and political scientists interested in the study of community power and local politics as well as criminologists interested in the study of police.
William T. Lyons, Jr. is Assistant Professor of Political Science, University of Akron. He previously worked for the Seattle Police Department.
TABLE OF CONTENTS
Contents
List of Figures
List of Tables
Acknowledgments
1. Competing Stories about Community and Policing
2. Community (Policing)
3. (Community) Policing
4. Communities and Crime on the South Side of Skid Road
5. The Emergence of the South Seattle Crime Prevention Council
6. Policing Reform in Southeast Seattle
7. Reciprocity in Police-Community Partnerships
8. Getting Back to Mayberry
Appendix
Notes
Bibliography
Index
REQUEST ACCESSIBLE FILE