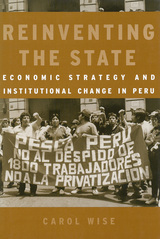 The political economic history of Latin America in the post-World War II era has largely been one of underachievement and opportunities lost. This all changed with the wave of market reforms that were implemented in the 1990s. However, the precise role of these reforms as an agent of change is still hotly debated. This in-depth analysis of the Peruvian case argues for an explanation that treats institutional innovation and state reconstruction as necessary conditions for the apparent success of the market in Latin America.
Exploring how state intervention has been both the cause of Latin America's economic downfall in the 1980s and the solution to its recovery, Reinventing the State analyzes three main phases of state intervention: the developmentalism that lasted until 1982, the state in retreat of the 1980s, and the streamlined state of the 1990s. Through a comprehensive examination of the Peruvian experience, the book explains the country's impressive turnaround from the standpoint of institutional modernization and internal state reform.
Written for a broad academic audience, the public-policy community, and the private sector, this book is also meant as a quick primer for any journalist, consultant, or private-sector analyst in need of an overview of the region's market-reform effort and how it has played out in Peru.
Carol Wise is Associate Professor, School of International Relations, University of Southern California.
TABLE OF CONTENTS
Contents
List of Tables
List of Abbreviations and Acronyms
Acknowledgments
Introduction
1. Latin America and the State-Market Debate: Beyond Stylized Facts
Part 1: From Developmentalism to Debt Shocks
2. The Rise of the Peruvian State and the Quest to Industrialize
3. A State Capitalist Experiment
Part 2: The State in Retreat
4. Orthodox Stabilization with Populist Overtones
5. The Neostructuralist Backlash
Part 3: Reinventing the State
6. Neoliberalism and State Reconstruction
7. In Search of a Competitive Strategy
Bibliography
Index
REQUEST ACCESSIBLE FILE