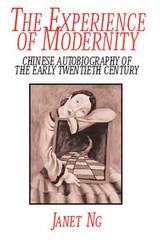 Autobiography of the first half of the twentieth century was used variously by different groups of writers to interrogate, negotiate, and even to program the social and political progress of China. However, despite the popularity and success of this genre, it has also been the most forgotten in literary and historical discussions. Personal stories and individual expressions seem to have had no place in 1920s, 1930s, and 1940s China, smothered instead by the grander rhetoric of nationalism. For this reason, autobiography's popularity during the era is an odd phenomenon and also an important genre for study.
The May Fourth Era (1917-40) began as a movement to make the classical literary language accessible to the common people and became a broader political movement against imperialism. The writing of autobiography was influenced by the idea of literature's social and political mission, yet at the same time autobiography was a uniquely potent venue for individual expression. Janet Ng examines this notion in The Experience of Modernity within the framework of autobiographical writings by Chen Hengzhe, Lu Xun, Hu Shi, Xie Bingying, Xiao Hong, Eileen Chang, Yu Dafu, and Shen Congwen.
Janet Ng is Assistant Professor of Asian Literature, the College of Staten.
TABLE OF CONTENTS