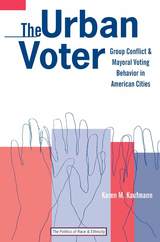 Karen Kaufmann's groundbreaking study shows that perceptions of interracial conflict can cause voters in local elections to focus on race, rather than party attachments or political ideologies. Using public opinion data to examine mayoral elections in New York and Los Angeles over the past 35 years, Kaufmann develops a contextual theory of local voting behavior that accounts for the Republican victories of the 1990s in these overwhelmingly Democratic cities and the "liberal revivals" that followed. Her conclusions cast new light on the interactions between government institutions, local economies, and social diversity. The Urban Voter offers a critical analysis of urban America's changing demographics and the ramifications of these changes for the future of American politics.
This book will interest scholars and students of urban politics, racial politics, and voting behavior; the author's interdisciplinary approach also incorporates theoretical insights from sociology and social psychology. The Urban Voter is appropriate for both undergraduate and graduate level courses.
Karen Kaufmann is Assistant Professor in the Department of Government and Politics at the University of Maryland, College Park.
TABLE OF CONTENTS