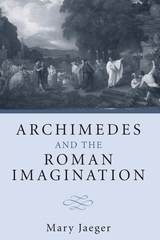 The great mathematician Archimedes, a Sicilian Greek whose machines defended Syracuse against the Romans during the Second Punic War, was killed by a Roman after the city fell, yet it is largely Roman sources, and Greek texts aimed at Roman audiences, that preserve the stories about him. Archimedes' story, Mary Jaeger argues, thus becomes a locus where writers explore the intersection of Greek and Roman culture, and as such it plays an important role in Roman self-definition. Jaeger uses the biography of Archimedes as a hermeneutic tool, providing insight into the construction of the traditional historical narrative about the Roman conquest of the Greek world and the Greek cultural invasion of Rome.

By breaking down the narrative of Archimedes' life and examining how the various anecdotes that comprise it are embedded in their contexts, the book offers fresh readings of passages from both well-known and less-studied authors, including Polybius, Cicero, Livy, Vitruvius, Plutarch, Silius Italicus, Valerius Maximus, Johannes Tzetzes, and Petrarch.

Mary Jaeger is Professor of Classics at the University of Oregon and author of Livy's Written Rome (University of Michigan Press, 1998).