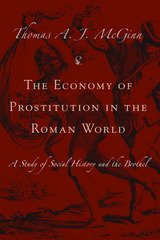 In recent years, a number of classical scholars have turned their attention to prostitution in the ancient world. Close examination of the social and legal position of Roman meretrices and Greek hetairai have enriched our understanding of ancient sexual relationships and the status of women in these societies. These studies have focused, however, almost exclusively on the legal and literary evidence.
McGinn approaches the issues from a new direction, by studying the physical venues that existed for the sale of sex, in the context of the Roman economy. Combining textual and material evidence, he provides a detailed study of Roman brothels and other venues of venal sex (from imperial palaces and privates houses to taverns, circuses, and back alleys) focusing on their forms, functions, and urban locations.
The book covers the central period of Roman history, roughly from 200 B.C. to A.D. 250. It will especially interest social and legal historians of the ancient world, and students of gender, sexuality, and the family.
Thomas A. J. McGinn is Associate Professor of Classical Studies at Vanderbilt University.
TABLE OF CONTENTS