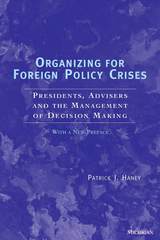 Presidents often assemble ad hoc groups of advisers to help them make decisions during foreign policy crises. These advisers may include the holders of the traditional foreign policy positions--secretaries of state and defense--as well as others from within and without the executive branch. It has never been clear what role these groups play in the development of policy. In this landmark study, Patrick Haney examines how these crisis decision groups were structured and how they performed the tasks of providing information, advice, and analysis to the president. From this, Haney investigates the links between a president's crisis management structure and the decision-making process that took place during a foreign policy crisis.
Haney employs case studies to examine the different ways presidents from Truman through Bush used crisis decision-making groups to help manage foreign policy crises. He looks at the role of these groups in handling the Berlin blockade in 1948, the Suez Crisis in 1956, the Tet offensive in 1968, the Yom Kippur War in 1973, and the Panama invasion in 1989, among other crises. He extends our understanding of the organization, management and behavior of the decision-making groups presidents assemble during foreign policy crises. This book will appeal to scholars of the American presidency and American foreign policy.
Patrick Haney is Assistant Professor of Political Science, Miami University of Ohio.
TABLE OF CONTENTS
Contents
List of Tables
Preface to the Paperback Edition
1. Organizing for Foreign Policy Crises
2. Case-Based Methods and Theory Development: Designing an Empirical Inquiry
3. Presidential Management of Decision-Making Groups during Foreign Policy Crises
4. Decision-Making Processes during Foreign Policy Crises
5. Presidents, Advisers, and the Management of Crisis Decision Making
Appendix: Coding Form
Notes
References
Index
REQUEST ACCESSIBLE FILE