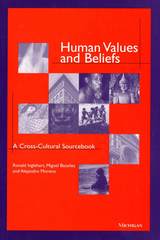 For over twenty-five years Ronald Inglehart and his colleagues have been collecting survey data on the beliefs and opinions of people all over the world on a variety of topics. This work led Inglehart to expound his noted theory about the development of post-materialist values in developed countries and explore its effect on politics. This book, based on the most comprehensive of these surveys, the World Values Survey conducted in over forty countries from 1990-93, publishes for the first time all of the findings of this survey. The questions cover issues such as politics, economics, religion, family life, and gender roles, and reflect differences in response by age, gender, economic standing, and education.
This book provides a wealth of data that will appeal to social scientists, journalists, people in international business, and policy makers interested in understanding social, political, or cultural attitudes in different countries.
Ronald Inglehart is Professor of Political Science, University of Michigan, and coauthor of Value Change in Global Perspective, as well as many other books and articles. Miguel Basanez is Professor of Political Science, Institutio Tecnologico Autonomo de Mexico, and director of MORI de Mexico. Alejandro Moreno is Professor of Political Science, Institutio Tecnologico Autonomo de Mexico.
TABLE OF CONTENTS
Contents
List of Tables by Topic
List of Figures and Tables by Number
Foreword
Introduction
Overall Margins
Tables and Figures
Technical Note
Publications Based on the 1990 World Values Surveys
World Values Survey 1990 Questionnaire
Index
REQUEST ACCESSIBLE FILE