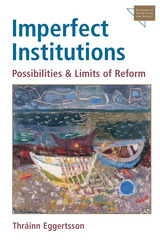 The emergence of New Institutional Economics toward the end of the twentieth century profoundly changed our ideas about the organization of economic systems and their social and political foundations. Imperfect Institutions explores recent developments in this field and pushes the discussion forward by allowing for incomplete knowledge of social systems and unexpected system dynamics and, above all, by focusing explicitly on institutional policy. Empirical studies extending from Africa to Iceland are cited in support of the theoretical argument.

In Imperfect Institutions Thráinn Eggertsson extends his attempt to integrate and develop the new field that began with his acclaimed Economic Behavior and Institutions (1990), which has been translated into six languages. This latest work analyzes why institutions that create relative economic backwardness emerge and persist and considers the possibilities and limits of institutional reform.

Thráinn Eggertsson is Professor of Economics at the University of Iceland and Global Distinguished Professor of Politics at New York University. Previously published works include Economic Behavior and Institutions (1990) and Empirical Studies in Institutional Change with Lee Alston and Douglass North (1996).