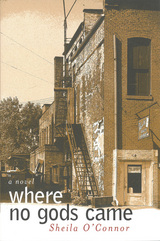 "Written with precision and perception, this is a highly recommended work from a writer to watch."
---Library Journal

"O'Connor . . . remains a consummate artist, true to her vision of a work that is bleak, truthful, and lacking any overt sentimental overtures. Her eye, a poet's eye, misses nothing."
---three candles

". . . a touching odyssey of a girl poised between the emotional abyss and the reader's heart."
---Minneapolis Star-Tribune

"A sensitive, often disquieting book that rings true throughout. . . . It's the skill of an accomplished writer that we see Faina's extraordinary spirit, while simultaneously experiencing her pain and despair. The end result is an uplifting, even inspiring book without any of the sugarcoating often found in stories like this."
---California Literary Review

Where No Gods Came is author Sheila O'Connor's compelling story of Faina McCoy, a young girl caught in a perilous scheme of elaborate lies created for her own harrowing system of survival. Enmeshed in a tangled family web, Faina is abruptly uprooted against her will from her father and finds herself half a continent away on the doorstep of a mother who abandoned her years before-but who can't live without Faina now. Alone, persecuted, and exploited, Faina must fend for herself as she searches for love and answers, navigating the streets of a strange city and forging bonds of feeling with liars and outlaws.

Sheila O'Connor is the author of the novel-in-stories Tokens of Grace, and has received fellowships from the Bush Foundation, the Minnesota State Arts Board, and Loft–McKnight, as well as the Tamarack Award for fiction. She teaches writing in the M.F.A. program at Hamline University.