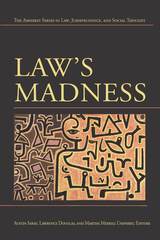 Law and madness? Madness, it seems, exists outside the law and, in principle, society struggles to keep these slippery terms separate. From this perspective, madness appears to be law's foil, the chaos that escapes law's control and simultaneously justifies its existence. Law's Madness explores the gray area between the realms of reason and madness.
The distinguished contributors to Law's Madness propose a fascinating interdisciplinary approach to the instability and mutual permeability of law and madness. Their essays examine a variety of discursive forms&mdash;from the literary to the historical to the psychoanalytic&mdash;in which law is driven more by narrative than by reason. Their studies delineate the ways in which the law takes its definition in part from that which it excludes, suppresses, or excises from itself, illuminating the drive to enforce barriers between non-reason and legality, while simultaneously shedding new light on the constitutive force of the irrational in legal doctrine.
Law's Madness suggests that the tense and paradoxical relationship between law and madness is precisely what erects and sustains law. This provocative collection asks what must be forgotten in order to uphold the rule of law.
Austin Sarat is William Nelson Cromwell Professor of Jurisprudence and Political Science at Amherst College. Lawrence Douglas is Associate Professor of Law, Jurisprudence, and Social Thought at Amherst College. Martha Merrill Umphrey is Associate Professor of Law, Jurisprudence, and Social Thought at Amherst College.
TABLE OF CONTENTS