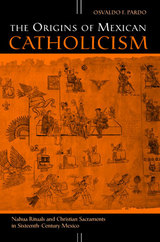 "Pardo's study provides a persuasive criticism of the widespread assumption that the process of Christianization in Mexico can be conceived as the imposition of a complete and fool-proof system that did not accept doubts or compromises. The Origins of Mexican Catholicism will become an invaluable tool for future researchers and enrich future debates on the subject."
---Fernando Cervantes, Bristol University, UK

"Pardo does an excellent job of balancing and contrasting sixteenth-century Catholic theology with Nahua thought and belief."
---John F. Schwaller, University of Minnesota


At first glance, religious conversion may appear to be only a one-way street. When studying sixteenth-century Mexico, one might assume that colonial coercion was the driving force behind the religious conversion of the native population. But The Origins of Mexican Catholicism shows how Spanish missionaries instead drew on existing native ceremonies in order to make Christianity more accessible to the Nahua population whom they were trying to convert.

Osvaldo F. Pardo explains that religious figures not only shaped native thought, but that indigenous rituals had an impact on the religion itself. This work illustrates the complex negotiations that took place in the process of making the Christian sacraments available to the native peoples, and at the same time, forced the missionaries to reexamine the meaning of their sacraments through the eyes of an alien culture.

For Spanish missionaries, ritual not only became a focus of evangelical concern but also opened a window to the social world of the Nahuas. Missionaries were able to delve into the Nahua's notions of self, emotions, and social and cosmic order. By better understanding the sociological aspects of Nahua culture, Christians learned ways to adequately convey their religion through mutual understanding instead of merely colonial oppression.

Given its interdisciplinary approach, this book will be of interest to specialists in Latin American intellectual and literary history, the history of religion, and anthropology, and to anyone interested in cross-cultural processes.
REQUEST ACCESSIBLE FILE