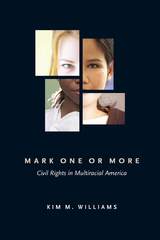 Mark One or More tells the little-known story of the struggle to include a multiracial category on the U.S. census, and the profound changes it wrought in the American political landscape.

The movement to add a multiracial category to the 2000 U.S. Census provoked unprecedented debates about race. The effort made for strange bedfellows. Republicans like House Speaker Newt Gingrich and affirmative action opponent Ward Connerly took up the multiracial cause. Civil rights leaders opposed the movement on the premise that it had the potential to dilute the census count of traditional minority groups. The activists themselves—a loose confederation of organizations, many led by the white mothers of interracial children—wanted recognition. What they got was the transformation of racial politics in America.

Mark One or More is the compelling account of how this small movement sparked a big change, and a moving call to reassess the meaning of racial identity in American life.

Kim M. Williams is Associate Professor of Public Policy in Harvard's Kennedy School of Government, and an expert in racial and ethnic politics and political movements.
TABLE OF CONTENTS