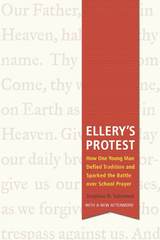 “Solomon’s fascinating and sweeping history of the legal fight over mandatory school prayers is compelling, judicious, and elegantly written. Fabulous!”

“Stephen Solomon’s Ellery’s Protest provides a brilliant analysis of a major Supreme Court decision that redefined the relationship between church and state almost a half century ago. This study goes well beyond simply offering a gripping account of the course of litigation that brought before the Justices the contentious issue of prayer and Bible reading in public schools, though the thoroughness of that account would merit careful reading by itself. Especially impressive is the author’s deep probing of hitherto neglected sources, and invaluable primary material including extensive direct contact with the plaintiff, the ‘Ellery’ of the book’s title. Finally, and perhaps most impressive, is Solomon’s careful placement of the issue and the case in a far broader context that is as critical to national life and policy today as it was four and a half decades ago when the high Court first tackled these questions.”

Great legal decisions often result from the heroic actions of average citizens. Ellery’s Protest is the story of how one student’s objection to mandatory school prayer and Bible reading led to one of the most controversial court cases of the twentieth century—and a decision that still reverberates in the battle over the role of religion in public life.

Abington School District v. Schempp began its journey through the nation’s courts in 1956, when sixteen-year-old Ellery Schempp protested his public school’s compulsory prayer and Bible-reading period by reading silently from the Koran. Ejected from class for his actions, Schempp sued the school district. The Supreme Court’s decision in his favor was one of the most important rulings on religious freedom in our nation’s history. It prompted a conservative backlash that continues to this day, in the skirmishes over school prayer, the teaching of creationism and intelligent design, and the recitation of the Pledge of Allegiance with the phrase “under God.”

Author Stephen D. Solomon tells the fascinating personal and legal drama of the Schempp case: the family’s struggle against the ugly reactions of neighbors, and the impassioned courtroom clashes as brilliant lawyers on both sides argued about the meaning of religious freedom. But Schempp was not the only case challenging religious exercises in the schools at the time, and Ellery’s Protest describes the race to the Supreme Court among the attorneys for four such cases, including one involving the colorful atheist Madalyn Murray.

Solomon also explores the political, cultural, and religious roots of the controversy. Contrary to popular belief, liberal justices did not kick God out of the public schools. Bitter conflict over school Bible reading had long divided Protestants and Catholics in the United States. Eventually, it was the American people themselves who removed most religious exercises from public education as a more religiously diverse nation chose tolerance over sectarianism. Ellery’s Protest offers a vivid account of the case that embodied this change, and a reminder that conservative justices of the 1950s and 60s not only signed on to the Schempp decision, but strongly endorsed the separation of church and state.

TABLE OF CONTENTS
Contents
1. Ellery’s Protest
2. The Making of a Rebel
3. Byse Breaks the Deadlock
4. The Sage and the Upstart
5. The Colonists Unite Church and State
6. How Religious Diversity Changed America
7. Diversity Forces Religion from the Schools
8. Excessive Religious Zeal
9. “Mr. Schempp, Do You Believe in the Divinity of Christ?"
10. Is the Bible Sectarian?
11. Why Not Recite the Navaho Invocation to Beauty?
Illustrations
12. The Race to the Supreme Court
13. “Colored by Our Own Experiences”
14. Passion Plays for All
15. Back to Judge Biggs
16. New York’s “Clay-Footed Pigeon”
17. Fifty-one Buddhist Children
18. In Chambers
19. Days of Defiance
20. Does Schempp Have a Future?
Epilogue
Afterword
Notes
Index
REQUEST ACCESSIBLE FILE