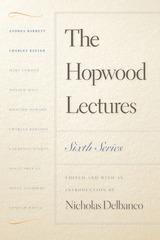 The prestigious Hopwood Creative Writing Awards were established in 1931 from a bequest of the will of Avery Hopwood, a University of Michigan graduate and one of the most popular and successful dramatists of his time. Hopwood left one-fifth of his estate to his alma mater, an endowment that now awards approximately $135,000 each year in prize money. Annual awards are offered to both undergraduate and graduate students in drama, screenplay, nonfiction, novel, short fiction, and poetry. Among the program's most famous recipients are Robert Hayden, Arthur Miller, Frank O'Hara, and Marge Piercy.

Nicholas Delbanco is Robert Frost Collegiate Professor of English Language and Literature and Chair of the Hopwood Committee. Delbanco is the author of twenty books of fiction and nonfiction, including, most recently, Spring and Fall: A Novel. As editor he has compiled the work of, among others, John Gardner and Bernard Malamud. In addition to directing the MFA Program and the Hopwood Awards Program at the University of Michigan, he has served as Chair of the Fiction Panel for the National Book Awards and has received a Guggenheim Fellowship and, twice, a National Endowment for the Arts Writing Fellowship. He lives in Ann Arbor, Michigan.