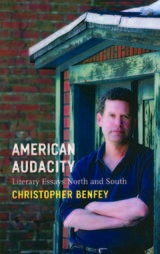 One of the foremost critics in contemporary American letters, Christopher Benfey has long been known for his brilliant and incisive essays. Appearing in such publications as the New York Review of Books, the New Republic, and the Times Literary Supplement, Benfey's writings have helped us reimagine the American literary canon. In American Audacity, Benfey gathers his finest writings on eminent American authors (including Emerson, Dickinson, Whitman, Millay, Faulkner, Frost, and Welty), bringing to his subjects---as the New York Times Book Review has said of his earlier work---"a scholar's thoroughness, a critic's astuteness and a storyteller's sense of drama."
Although Benfey's interests range from art to literature to social history, this collection focuses on particular American writers and the various ways in which an American identity and culture inform their work. Broken into three sections, "Northerners,""Southerners," and "The Union Reconsidered," American Audacity explores a variety of canonical works, old (Emerson, Dickinson, Millay, Whitman), modern (Faulkner, Dos Passos), and more contemporary (Gary Snyder, E. L. Doctorow).
Christopher Benfey is the author of numerous highly regarded books, including Emily Dickinson: Lives of a Poet; The Double Life of Stephen Crane; Degas in New Orleans: Encounters in the Creole World of Kate Chopin and George Washington Cable; and, most recently, The Great Wave: Gilded Age Misfits, Japanese Eccentrics, and the Opening of Old Japan. Benfey's poems have appeared in the Paris Review, Pequod, and Ploughshares. He has held fellowships from the Guggenheim Foundation, the National Endowment for the Humanities, and the American Council of Learned Societies. Currently he is Mellon Professor of English at Mount Holyoke College.
"In its vigorous and original criticism of American writers, Christopher Benfey's American Audacity displays its own audacities on every page."
---William H. Pritchard
TABLE OF CONTENTS