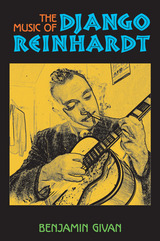 "The Music of Django Reinhardt is an impressive contribution to the field of jazz studies. The book offers a penetrating view into the music of one of jazz's most intriguing early figures."
---Keith Waters, coauthor, Jazz: The First Hundred Years

"An important addition to the literature on jazz, Givan's book provides many insights into Reinhardt’s solo building and unorthodox guitar playing; it is richly illustrated with many excellent musical transcriptions."
---Thomas Owens, author of Bebop: The Music and Its Players

"Givan has painstakingly assembled an analytical interpretation of Reinhardt's music that is rigorous, compelling, and illuminating. This book makes a unique contribution to the field of jazz studies and guitar music in general."
---Brian Harker, author of Jazz: An American Journey

When most people think of the great jazz guitarist Django Reinhardt, they conjure up the unusual details of his colorful life: a childhood spent in gypsy encampments outside of Paris; the tragic caravan fire when he was eighteen that rendered his left hand nearly unusable; and his survival during World War II, when gypsies were massacred by the hundreds of thousands. The amazing story of Reinhardt’s life even became the basis for Woody Allen's Sweet and Lowdown.

Yet, it is the music of Django Reinhardt that made him one of the most original guitarists in history. In particular, his partnership with violinist Stéphane Grappelli, in the Quintette du Hot Club de France, brought him international renown and the attention of some of the most important American jazz musicians of the day, including Coleman Hawkins, Benny Carter, and Duke Ellington.

The Music of Django Reinhardt explores the story of the man and his music as never before. Benjamin Givan shows how one of jazz's greatest guitarists created his unparalleled sound. This book is an analytical study of his music, including his process, his improvisational style, and his instrumental technique.

The book features transcriptions from records of the 1920s through the 1950s and includes detailed discussion of selected performances from one of the most important guitarists in history.

Benjamin Givan is Assistant Professor of Music at Skidmore College. His writings on jazz have appeared in scholarly publications such as Current Musicology and the Musical Quarterly, as well as the popular jazz magazine Down Beat. He received his Ph.D. in music theory from Yale University.
REVIEWS

"The theoretical detail in this well-researched book will be difficilt of the less-experienced readers to understand. But those with substantial knowledge will find it engaging."
—C Wadsworth Walker, Choice

"I was fascinated by the book and the descriptions of many of the sides were vivid enough that I could hear the music in my head..."
—Jazzbeat

"One of the most satisfying analytical overviews of a musician ever written….Ben Givan sets a high standard for all who follow."
—Scott DeVeaux, University of Virginia, American Music