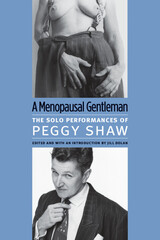 "With classic butch finesse---that handsome combination of vulnerability and toughness---Peggy Shaw pieces together the challenges of growing up butch in the 1950s. Shaw is an engaging performer and inspired writer."
---Gay Community News

Obie-award-winning performer and writer Peggy Shaw has been playing her gender-bending performances on Off Broadway, regional, and international stages for three decades. Co-founder of the renowned troupe Split Britches, Shaw has gone on to create memorable solo performances that mix achingly honest introspection with campy humor, reflecting on everything from her Irish-American working-class roots to her aging butch body.

This collection of Shaw's solo performance scripts evokes a 54-year-old grandmother who looks like a 35-year-old man (in her classic Menopausal Gentleman); a mother's ambivalent ministrations to a daughter she treated like a son (in the raw You're Just Like My Father); Shaw's love for her biracial grandson, for whom she models masculinity (in the musically punctuated To My Chagrin); and a mapping of her body's long, bittersweet history (in the lyrical Must: The Inside Story, a collaboration with the UK's Clod Ensemble). The book also includes a selection of Shaw's other classic monologues and an extensive introduction by Jill Dolan, Professor of English and Theater and Dance at Princeton University and the blogger behind The Feminist Spectator website.

Jill Dolan is Professor of English and Theater and Dance at Princeton University, author of four books, and the blogger behind The Feminist Spectator website.