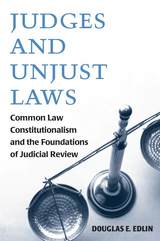 "A powerful historical, conceptual, and moral case for the proposition that judges on common law grounds should refuse to enforce unjust legislation. This is sure to be controversial in an age in which critics already excoriate judges for excessive activism when conducting constitutional judicial review. Edlin's challenge to conventional views is bold and compelling."
---Brian Z. Tamanaha, Chief Judge Benjamin N. Cardozo Professor of Law, St. John's University, and author of Law as a Means to an End: Threat to the Rule of Law
In Judges and Unjust Laws, Douglas Edlin uses case law analysis, legal theory, constitutional history, and political philosophy to examine the power of judicial review in the common law tradition. He finds that common law tradition gives judges a dual mandate: to apply the law and to develop it. There is no conflict between their official duty and their moral responsibility. Consequently, judges have the authority---perhaps even the obligation---to refuse to enforce laws that they determine unjust. As Edlin demonstrates, exploring the problems posed by unjust laws helps to illuminate the institutional role and responsibilities of common law judges.
Douglas E. Edlin is Associate Professor in the Department of Political Science at Dickinson College.
TABLE OF CONTENTS