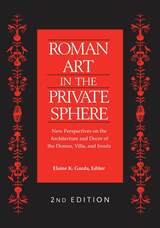 Roman Art in the Private Sphere: New Perspectives on the Architecture and Decor of the Domus, Villa, and Insula
edited by Elaine K. Gazda
University of Michigan Press, 2010
Paper: 978-0-472-03439-0
"This is a stimulating book and should be compulsory reading for all students of Roman art."
---Classical Review
"[A] model exploration into the ways private décor can be used to facilitate a larger understanding of Roman art and society."
---Classical World
Roman Art in the Private Sphere presents an impressive case for the social and art historical importance of the paintings, mosaics, and sculptures that filled the private houses of the Roman elite. The six essays in this volume range from the first century BCE to the fourth century CE, and from the Italian peninsula to the Eastern Empire and North African provinces, treating works of art that belonged to every major Roman housing type: the single-family atrium houses and the insula apartment blocks in Italian cities, the dramatically sited villas of the Campanian coast and countryside, and the palatial mansions of late antique provincial aristocrats. This new edition includes a fresh contribution by editor Elaine Gazda, tracing the developments in the treatment of private Roman art since the publication of the original edition of Roman Art in the Private Sphere.
Elaine K. Gazda is Professor of the History of Art and Curator of Hellenistic and Roman Antiquities at the Kelsey Museum of Archaeology, University of Michigan.
REVIEWS
"For all the authors, attention to the ensemble, a sense of the relation between the formal and the iconographic, and the desire to historicize their material contribute to making this anthology unusual in its rigorous and creative attention to the way that art and architecture participate in the construction of the image of the Roman elite."
—Art Bulletin
— Art Bulletin