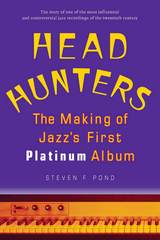 ". . . [a] very readable dissection of all the different ways in which Herbie Hancock's 1973 album Head Hunters broke the mould. . . . An entertaining and thought-provoking read."
---Jazzwise Magazine
"An important and timely book. Pond's work reflects the insight an informed researcher and skilled performer can bring to the study of music."
---Travis Jackson, Associate Professor of American Music, University of Chicago
Winner of the U.S. chapter of the International Association for the Study of Popular Music's Woody Guthrie Award for most distinguished work on popular music.
Steven Pond's Head Hunters captures a transitional moment in modern music history, a time when jazz and rock intermingled to create a new, often controversial, genre. At the forefront of that style was Head Hunters, Herbie Hancock's foray into the fusion jazz market.
The album became a turning point for a radical shift in both the production and reception of jazz. It was the best-selling jazz record of all time to that point, and the music industry quickly responded to the expanded market, with production and promotion budgets rising tenfold. Such a shift helped musicians pry open the control-booth door, permanently enlarging their role in production. But critics, believing that rock and funk might be appropriating jazz to new musical ends---or more ominously, for commercial reasons---grew increasingly alarmed at what they saw as the beginning of the end of jazz.
Steven F. Pond is Associate Professor of music at Cornell University. He will become Editor-in-Chief for the journal Jazz Perspectives in 2011.
TABLE OF CONTENTS