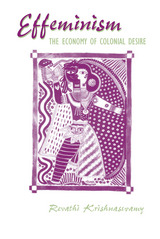 Effeminism charts the flows of colonial desire in the works of British writers in India. Working on the assumption that desire is intensely political, historically constituted, and materially determined, the book shows how the inscriptions of masculinity in the fictions of Flora Annie Steel, Rudyard Kipling, and E. M. Forster are deeply implicated in the politics of colonial rule and anticolonial resistance. At the same time, the study refrains from representing colonialism as a coherent set of public events, policies, and practices whose social, political, and cultural meanings are self-evident. Instead, by tracing the resistant and unassailable modes of masculine desire in colonial fiction, the study insists on an explosive revolutionary potential that makes desire often intractable. And by restoring the political in the unconscious and the unconscious in the political, the book proposes to understand colonialism in terms of historical failure, ideological inadequacy, and political contention. This book will interest not only scholars of 19th- and 20th-century British literature and colonial and postcolonial literatures, but also those working in the areas of cultural studies, gender studies, and South Asian studies.“Krishnaswamy uses ‘effeminization’ to describe the complicated paths of colonial sexual desire, stereotypes of Indian male passivity, and how ‘colonizing men used womanhood to delegitimize, discredit and disempower colonized men.’ Reading texts by Rudyard Kipling (a ‘culturally hybrid male’), E. M. Forster (a homosexual), and F. A. Steel (a woman), the author shows how these tactics affect the representation not only of colonized men and women but also of the marginalized writers of the colonizing culture. In the process, she makes intriguing analogies between androgyny and biculturalism.”—Choice
AUTHOR BIOGRAPHY
Revathi Krishnaswamy is Associate Professor of English at San José State University. She is coeditor, with John C. Hawley, of The Postcolonial and the Global.
REQUEST ACCESSIBLE FILE