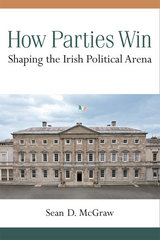 In recent decades, Ireland’s three major political parties have maintained over 80 percent of the vote in the face of rapidly shifting social divisions, political values, and controversial issues, though not by giving voice to particular interest groups or reacting to issues of the day. Rather, Sean D. McGraw reveals how party leaders select, or purposely sideline, pressing political and social issues in order to preserve their competitive advantage. By relegating divisive issues to extraparliamentary institutions, such as referenda or national wage bargaining systems, major parties mitigate the effects of changing environments and undermine the appeal of minor parties.


This richly textured case study of the major parties in the Republic of Ireland engages the broader comparative argument that political parties actively shape which choices are available to the electorate and—just as importantly—which are not. Additionally, McGraw sets a new standard for mixed-method research by employing public opinion surveys, party manifestos, content analysis of media coverage, the author’s own survey of nearly two-thirds of Irish parliamentarians in both 2010 and 2012, and personal interviews conducted over the course of six years.
AUTHOR BIOGRAPHY
Sean D. McGraw is Assistant Professor of Political Science at the University of Notre Dame, where he is a Fellow in the Helen Kellogg Institute for International Studies, the Institute for Educational Initiatives, the Keough-Naughton Institute for Irish Studies, and the Nanovic Institute for European Studies.